You are here: Home > Aly Raisman’s Nude Photoshoot Isn’t As Scandalous As You Think 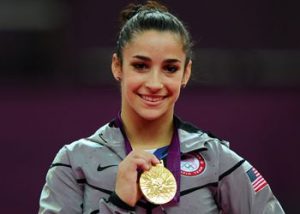 While posing nude on the balance beam, Raisman bears her muscles, but reveals nothing, leaving plenty to the imagination, as Tobin points out. In the world of nude photography, her shoot may be as tznius, or modest, as it gets. Though the shoot may be suggestive, it suggests not only 21-year-old Raisman’s potential sex appeal as gymnast-Jewess, but also a triumph of body positivity amidst industries — both gymnastics and nude portraiture — where many girls have struggled with eating disorders.

“[The headline] sounds a little sexualized — that’s one frame — but when you listen to the interview, [Reisman’s] talking about what she’s able to accomplish with her body through discipline. That frame is a very different frame,” says Deborah Meyer, executive director of Moving Traditions, which runs Rosh Hodesh: It’s a Girl Thing, a program promoting positive body image for adolescent girls through Jewish sources.