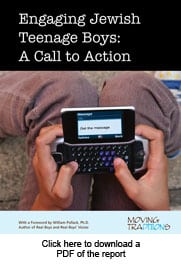 We now have the tools to reverse the loss of Jewish boys after bar mitzvah. Moving Traditions’ comprehensive report, Engaging Jewish Teenage Boys: A Call to Action, offers Seven Lessons and Seven Principles to help Jewish educators, funders, and parents more effectively reach teenage boys. The research served as the foundation for Moving Traditions’ program, Shevet Achim: The Brotherhood, which was launched nationally in 2011.

The most striking research finding is that putting boys’ developing masculinity — their “journey to manhood” — at the center of male-focused Jewish programming, with a well-trained male facilitator, will keep more boys engaged in Jewish life beyond bar mitzvah.

The report is distilled from three years of research, 40 focus groups with Jewish boys, and program development, and grows out of the success of Moving Traditions’ work with adolescent girls in Rosh Hodesh: It’s a Girl Thing!

“We found that boys’ experience of their lives as males matters enormously to them: the literature suggests it, and our focus groups and action research confirm it,” said Dr. Michael Reichert, Moving Traditions’ lead researcher and Executive Director of the Center for the Study of Boys’ and Girls’ Lives, a research partnership with the University of Pennsylvania.

“As they set their identities, having the chance to meet with other boys to explore being male is deeply engaging,” Reichert said.

The findings of four research studies commissioned by Moving Traditions are incorporated into the Call to Action report and can be downloaded here.