You are here: Home > Facing This New Reality Together 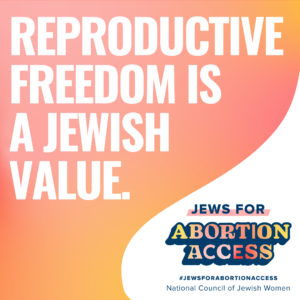 Before I became CEO of Moving Traditions four months ago or dedicated my life to Jewish communal service a decade ago, I trained and practiced as a litigator. Though I don’t miss the contentiousness of legal practice, I love the law.

By design, the law is slow-moving and plodding, keeping an eye on the past in every decision. The law’s respect for the past comes from the concept of “legal precedent” – the idea that decisions made by a court of authority must be respected and adhered to. It is frustrating, but there is integrity to this incremental process.

It is because of this focus on the past, in part, that the law has been a double-edged sword – a tool that can be used to usher in equality like during the civil rights era, but also a tool that has been used to bludgeon and control the bodies of women, Native Americans, and Black people, among others, throughout history.

Last week, ironically under the façade of an originalist interpretation that honors history, the conservative justices of the United States Supreme Court spat upon legal precedent, upon decades and decades of established law, and upon the popular will of the people as measured through opinion surveys. It did the very thing courts are never supposed to do – it imposed a rank partisan interpretation and ignored multitudes of decisions made by that very court and lower federal courts for half a century.

Not with a whimper, but with a bang, to appropriate T.S. Eliot’s words, the Supreme Court undid years of progress. But it also undid faith in the court itself by ignoring the integrity of the legal process and legal theory in service to an agenda that harms those who can get pregnant.

I am so sad and angry. I am sad for the millions of people who will not be able to access the care they need to save their lives. But I am furious at how this decision will further erode public trust in our governmental institutions.

The CDC has reported an increased sense of hopelessness and persistent sadness among preteens and teens for years now. This miasma is common in places where governmental institutions have lost the trust of their people – one only needs to study Soviet history to understand the grey malaise that accompanied the government’s increasing ineffectiveness. It is impossible not to feel hopelessness when our most-revered institutions act corrupt and agenda-driven.

And we are hearing that despair from teens all the time. But we are also hearing a righteous anger, a will to wrangle back control of their bodies.

Though the past few days have been veiled in despair, listening to the teens in our programs helps give me hope. While working in the law had me constantly looking to the past, running a nonprofit is about a brighter future. Moving Traditions’ work is a corrective to the current malaise, helping youth thrive through the pursuit of personal wellbeing (shleimut), caring relationships (hesed), and a Jewish and feminist vision of equity and justice (tzedek).

This is an important moment for all those things: For teens to understand their own values, to be connected to others in civic engagement, and to understand that they are empowered to build toward a better future.

If there is one hope I carry with me today, it is that we are about to enter a golden age of activism among young people. Moving Traditions, along with much of the Jewish community, has worked to make this generation of young people ready to fight for what is right, to have a sense of what a better future might be, and to forge that future.

Moving Traditions stands with an incredible number of partners in protection of those young people languishing at the loss of choice, optimism and hope. And together, we also stand side by side with those young people ready to fight as we charge into this battle – not with a whimper, but with a bang.

RELATED RESOURCES FOR YOU: