You are here: Home > Sparking Resistance: Women Risk-Takers In Those Days and These 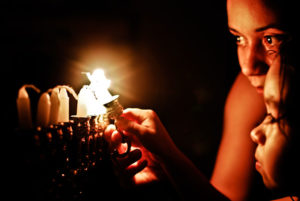 When we come to Hanukkah with a gender lens we enable ourselves to see more of the holiday’s complexity and richness, and more ways that its messages are relevant and meaningful for our own lives.

According to medieval sources, in the time of the Hasmoneans, the Syrian-Greeks had decreed that all Jewish brides would be violated by Syrian-Greek officers before they could sleep with their husbands. This institutionalized practice of rape was put to end when one Hasmonean bride tore off her wedding dress in the middle of her wedding party. Standing naked before all those assembled, she used her body to shock the assembled guests and waken them to the abuse of power and, the assault of women, that had become an accepted part of their status quo. When this bride exposed herself, she was putting herself on the line to expose her whole community.

The nameless bride is said to have sparked the Maccabean revolt which we celebrate on Hanukkah. Another woman whose story has been part of Hanukkah is Judith, who took power into her own hands, confronted the passive male leadership of her time, and then went undercover to kill the head of the enemy who were then threatening the Jews.

This year we have witnessed many women stand up in power and vulnerability to expose gender and sexual injustice. While not literally ripping off their clothes, victims of abuse, from Christine Blasey Ford to the women workers of color at two Chicago Ford auto plants, many among us have made ourselves — and often our families too, more vulnerable in order to awaken our society to the ongoing reality of sexual harassment and assault and other abuses of power.

As we celebrate the power of Hanukkah, let us remember the legacy of the women of Hanukkah and also take time to acknowledge that women of all races and socio-economic statuses, cisgender and transgender, have this year, and for many years, taken bold actions to shift society and hold their abusers and all of us accountable.

Has it brought us to a time of miracles? Yes and no. Long-time abuser Harvey Weinstein is under house arrest and Larry Nasser is serving time for the crimes he committed. Some workplaces are safer. Some young people are having more honest and open conversations about sex and power.

Not all those who were brave enough to come forward this year and share their painful #metoo experiences were met with justice, or even believed. We who are in the business of cultural and systemic change recognize that change takes time and does not unfold linearly. Even the Maccabees, the heroes of Hanukkah, not long after their victory assimilated in ways that they had fought against.

Hanukkah is also about the one small cruse of oil being enough. It’s about the leap of faith and the powerful conscious choice to try, to use that little bit of oil, because it is always worth trying to spark light.

This Hanukkah let us honor the women, trans and nonbinary people, and men who are doing their part to show us that society can and will change when the truth is spoken, when justice is sought, when policies are changed, when voters are organized, when voices are raised.