You are here: Home > US Teen Contest Winners Reflect On Praying With WOW 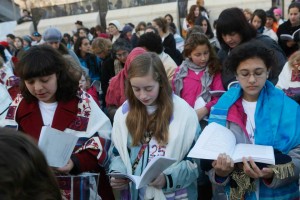 Eliza Moss-Horwitz, Lucy Sattler and Alexandra Schwartz pray with Women of the Wall. Schwartz (right) holds an empty Torah cover beneath her prayer book, symbolizing the Torah scroll the group was prevented from bringing in to the Kotel plaza.

The three American Jewish teens who won a contest to join the Women of the Wall at the Kotel Thursday say they will never forget the experience. Eliza Moss-Horwitz, Lucy Sattler and Alexandra Schwartz were brought to Israel by Moving Traditions, a Philadelphia-based organization advocating for a more expansive view of gender in Jewish learning and practice.

Categories: Campaigns, In The News, Women of the Wall Campaign