You are here: Home > Reflections on Bat Mitzvah Comes of Age by Hannah Elbaum 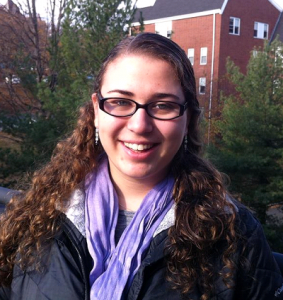 Hannah Elbaum is a junior at Newton South High School. She is an active participant in the North American Federation of Temple Youth-Northeast region, a Diller Teen Fellow from the Boston cohort of 2012-2013, and a fellow of the pilot cohort of Rising Voices, a partnership of JWA and Prozdor. She also spends quite a bit of time at Temple Beth Elohim in Wellesley, MA where she is engaged in a variety of leadership roles. Hannah began Moving Traditions Rosh Hodesh: It’s a Girl Thing! program in the sixth grade.  In her spare time, she avidly watches Gilmore Girls, and color coordinates her planner.

“How many of you have had a bat mitzvah ceremony?”

Almost every hand in the room went up — except for a few girls who will be called to the torah in the months ahead.  This scene could not have taken place in the last century; in fact, in the early 1900’s, not a single girl or woman would have raised her hand.  To most of us, myself included, that seems like a million years ago.   Have we come so far since then? Not as far as we would like to think.

On March 2, I attended the Moving Traditions event “Rosh Hodesh Across Boston: Bat Mitzvah Comes of Age” at Temple Emanuel in Newton.  The synagogue was filled with fifty or so middle school and high school-age girls who are participating in the organization’s Boston-area Rosh Hodesh: It’s a Girl Thing! program and their parents.   Though the crowd was unfamiliar, the warmth of the community and the importance of the occasion made me feel welcome right away.

Centered on the idea of bat mitzvah milestones, Rabbi Carole Balin, Ph. D. of the Hebrew Union College-Jewish Institute of Religion spoke about the history of bat mitzvah and led participants through Bat Mitzvah Comes of Age, an exhibit about bat mitzvah “firsts” curated by Moving Traditions and the National Museum of Jewish American History.  Balin explained that while Judith Kaplan was the first girl to have a recorded bat mitzvah service in 1922, her ceremony looked incredibly different from the rituals we practice today.  In fact, the idea of bat mitzvah didn’t catch on for another thirty years.

In a short film, we learned about the experiences of women who had their b’not mitzvahs at different points in time, and how their ceremonies contributed to the culture we know today. Some girls had the first bat mitzvahs in their community, while others were the first to read directly from the Torah.  What the women shared was strength and conviction in their Judaism to stand up for what they believed in, even when others didn’t support them.  Sally Gottesman, who founded Moving Traditions, shared that in the 1970’s, her rabbi refused to perform her bat mitzvah ceremony and another man walked out of her service.   The last girl in the film had her bat mitzvah just three years ago, in 2011. She was the first female to become bat mitzvah in her Orthodox congregation.

Women and girls’ roles in Judaism are constantly changing, as exemplified by the history and tradition of bat mitzvah. Those who choose to pursue this rite of passage are choosing to live a Jewish life, which is no small feat in a world where the Jewish population remains drastically smaller that of most other religions. As members of the Moving Traditions, Rosh Hodesh: It’s A Girl Thing! groups, participants learn the importance of their role in the Jewish community and their power to create change. That afternoon, when asked if they would choose to have a bat mitzvah even before it was the custom, the majority of girls responded with a resounding yes.  By empowering younger generations of women to value their strength and responsibility, the Rosh Hodesh program ensures a bright future for Jewish women, both in and out of the religious world.

My own bat mitzvah opened up a world of Judaism to me that I had never experienced before. At the first official meeting with my bat mitzvah tutor, he told me that the bat mitzvah itself is just a formality. The ceremony is incredibly important, and the rituals connect us to our ancestors, but the process of reaching that moment, the practicing, and the responsibility is what ultimately makes you become a Jewish adult. With that sense of leadership I have become active in my synagogue’s youth group, and become a madricha (teaching assistant) in the Hebrew school.  I hope to serve as a positive role model for younger girls and inspire them to become empowered Jewish women, too.