You are here: Home > Such a Time as This 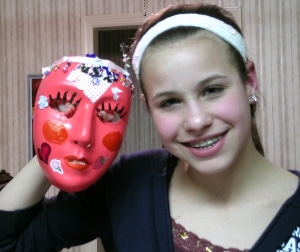 The Purim mask-making activity is one of the most popular with Rosh Hodesh girls.

When it is time to act, will our youth believe that they have the power to speak up for what is right?

On Purim, we read of Mordechai’s entreaty to his reluctant niece, Esther, whom he has helped become the Queen, to go to King Ahasuerus and ask him to spare the Jewish people. He asks:

And who knows whether you have not attained royalty for such a time as this?

Through both careful planning and luck, Esther is in the right place—Ahasuerus’ palace—at the right time—as the evil Haman is plotting to destroy the Jews.

At this moment, Mordechai realizes that Esther can take leadership. Hearing his question, Esther shifts as well. Esther prays, orders the Jews of Shushan to fast with her for three days, and readies herself to go the king to save her people.

Today, like Esther, an unprecedented number of women now see themselves as ready “for a time such as this.” And more and more men, like Mordechai, are there to encourage and support women, while also stepping up themselves.

A Time To Step Up

At town hall meetings, on marches across the country, and in the halls of Congress, women—and men, and gender nonconforming people—are making their voices heard.

In our signature programs, Rosh Hodesh, Shevet, and Tzelem, Moving Traditions shares with Jewish teens stories from our history and tradition—like the Purim story—of women and men stepping forward for the Jewish people, and for all who are in need of justice.

Helping teens explore issues of identity and society and develop a personal set of ethics, grounded in Jewish wisdom, is at the core of Moving Traditions’ work.

In and out of our groups, Jewish teens of all genders can look both to our tradition of pursuing justice and to the world around them to imagine themselves in the roles of Esther the hero and Mordechai, her champion.

This Purim, let us celebrate courage and inspire each other to step up for what is right,
at such a time as this.