You are here: Home > Three Best Practices for Discussing Women of the Wall with Teens 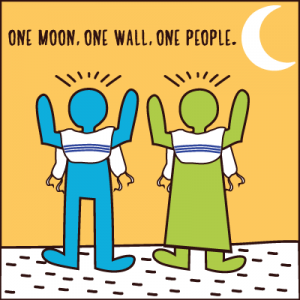 Many Jewish teens have seen photographs of women being arrested at the Western Wall and are wondering what they can do to ensure that all people can practice Judaism freely at the Wall. If you are a parent or educator, we offer the following three best practices for discussion:

1)   Go beyond the Modern/Liberal Judaism vs. Traditional/Orthodox Judaism rhetoric.

The debate about the Wall is not whether it should be a Liberal synagogue or an Orthodox one; the debate is how the site can be shared so that all types of Jewish people can pray with full freedom. There is no need to demonize Orthodox Judaism or those who follow rabbinic authorities in our efforts to be in solidarity with Women of the Wall. In fact, there are Orthodox Jewish women and men who pray only in separate prayer spaces and support the vision of Women of the Wall. Women of the Wall’s leader, Anat Hoffman, has said publicly that she would be satisfied with a time-sharing or a space-sharing agreement, and that both of those approaches fully respect Orthodox practice existing alongside Liberal practice.

2)   Help people understand that the Israeli government has a role in ensuring religious freedom.

Thankfully, over the last few months the Israeli government has taken this issue seriously, and there does seem to be some willingness to work toward change. Prime Minister Netanyahu has approved the plans of Jewish Agency Chairman Natan Sharansky to expand the plaza in front of the Wall. But now there is a judicial battle regarding how “local custom” will be defined in the current space, and we hope that this state of affairs will not lead to more arrests of women. What we do know is that the Israeli government is listening to Israelis on this issue, as well as to Jews around the world.

There are many women in the Orthodox community who support the idea that Orthodox rabbis should be in sole control of the Wall. And there are many men in the liberal community that have been advocates for the Women of the Wall. Men have brought tallitot into the plaza area for women to wear, and men have been allies to women on this issue. This is a debate between those who believe that strict gender segregation and gender restrictions for women are the only options for prayer at the Wall, versus those who believe that all worshipers can be accommodated at the Wall.

Want ideas about how to engage the tweens or teens in your community in the issues raised by Women of the Wall in a classroom or informal education setting? Moving Traditions has created resources available to all Jewish educators. Please contact Sarah Fox, sfox@movingtraditions.org for a free copy.