You are here: Home > We Won’t Get Fooled Again: Helping Teens Identify Pharaoh 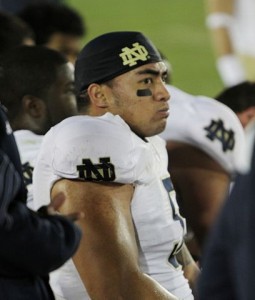 Manti Te’o’s saga is one of being fooled and fooling others.
(Photo credit: Shotgun Spratling/Neon Tommy )

By Rabbi Daniel Brenner, Chief of Education and Program

A boy is tricked into being part of a game with other boys only to find out that he is the target of mockery and abuse.  A girl is happy to be included as a “friend” at a lunch table until she finds it was only a ploy to get back at another girl. A boy is “hit on” as part of a practical joke. A girl is lured into an unwelcomed physical encounter.

Being fooled is one of the many challenges that teens face on a daily basis. The challenge is new – and old:

There are three things you need to know to be a man: don’t fool yourself, don’t fool others, and don’t allow yourself to be fooled by others. And do it all without trying to impress anyone.

In preparation for Passover, we’ve been thinking about the “don’t allow yourself to be fooled by others.”

Today, teens see a world where it is normal to fool people. It seems as if each week, a celebrity, athlete, or politician who has lied to the public admits their shame. TV shows and videos based on pranks form the core of the comedy diet. And every 79 seconds a thief will try to open a bank account with a stolen identity.

What are the roots of fraud? According to Midrash, the slavery of the Hebrews in Egypt began with being fooled.

In the Book of Exodus we read:
“And the Egyptians made the children of Israel work vigorously.”
What is the Hebrew word for vigorously? Parech.
In Hebrew, Parech can also mean “peh rach” a “soft mouth” meaning “gentle speech”
How did the Egyptians make the Hebrews work with “gentle speech?”
Slavery began with Pharaoh saying: “I beg of you, as a special favor, work alongside me today.”
Pharaoh picked up a basket and shovel and everyone followed him.
But when it grew dark, he said to his men, “count up the bricks.”
When they finished he said to the Hebrews:
“This is the number of bricks that you must make for me everyday.”
– Sotah 11b; Tanchuma B’haalotecha, 23.

According to this Midrash, the Hebrews got taken in by soft words. They were conned, lured, and scammed.

How might this Midrash help teens to become discerning adults?

It would be pat to say to teens simply, “don’t get fooled.” But we, as parents, educators, and others who are concerned about teens and their interactions online and off, should look more deeply with them at the challenge that this Midrash poses:

How do we protect ourselves from being fooled without ending up distrusting the entire world?

On Passover, Rabbi Shalom Dov Bear taught, we as a community return to a state of authenticity and humility. Refraining from chametz (leavened bread) and eating matzah is a spiritual practice that helps us notice and distance ourselves from anything that is “puffed up.”

As teens come of age, they need adult guidance in discerning who they can trust. Teaching them to detect the “puffed up” – those who manipulate others in an effort to assert control, requires helping teens understand the dynamics of power, the attraction to Pharaoh’s methods, and the many ways that people can resist, disrupt, and break free.

This year, may we all taste the matzah – the bread of humility – and help the world to embrace an ethic of authenticity, honesty, and freedom.