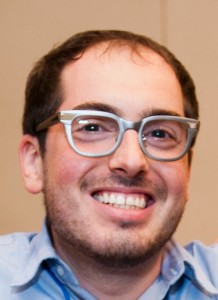 A life-long New Yorker and graduate of Vassar College, David Lieberman has led Shevet Achim: The Brotherhood Groups at B’nai Jeshurun in New York City for six years.  Through the B’nai Jeshurun teen program David leads service based teen trips to the Dominican Republic, Nicaragua, New Orleans and Israel.  In addition to his work as a Jewish Educator, David is an EMMY award winning documentary film and television editor whose work include We Could Be King, Magic Camp, Notes from Liberia, and the ESPN show Hell Week.  This year he is hard at work on a new feature documentary about women’s lacrosse on a Native American reservation.

We Could Be King follows the story of how school budget cuts impact high school athletics, particularly a football team from a low-income district of Philadelphia.

The New York Times said that the film “has a memorable season’s worth of moving stories to tell on and off the field, as rich as any in ‘Friday Night Lights.’” The film is also a tableau of stories about male gender codes – as the teens struggle with isolation, depression, violence, and academic pressure.

David, who lives in Harlem, has led Shevet Achim groups for teen boys at Congregation B’nai Jeshurun on the Upper West Side for the past six years. In the words of one of his teens:

“Whether we are playing with the idea of what it is to be a man or looking at problems as simple as procrastination, we always look to one another and David for different perspectives and support. David always comes up with great activities that strengthen our bonds and keep us involved in each other’s struggles.”

We are thrilled to have David return as a trainer for Shevet Achim: The Brotherhood and to work coordinating our new program of Shevet Achim fellows. Click here for more information about Moving Traditions’ National Training Conferences.